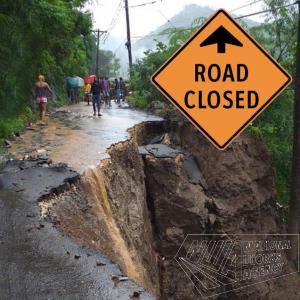 The National Works Agency (NWA) is advising the travelling public that effective immediately the Gordon Town road in St. Andrew is closed in the vicinity of Stand Up Hill. The Agency says the roadway is not safe for use by any mode of transportation.

A section of the road embankment failed at the weekend following heavy rains associated with Tropical Storm Eta, which reduced the roadway to less than a driving lane. National Works Agency (NWA) Communication and Customer Services Manager, Stephen Shaw, says the breakaway poses a grave risk to motorized, as well as pedestrian traffic and urges residents to avoid the area.

If persons need to travel between Gordon Town and other locations, they are encouraged to use the Irish Town or Newcastle Road which passes through Silver Hill Gap, Content and Guava Ridge.

Mr. Shaw says while the NWA recognizes that the detour route is much longer than the ordinary route, it is the only safe, accessible and practical way available at this time. He explains that the Agency has identified an alternative roadway through Savage Pen, however extensive work is required to make the parochial road traversable in sections.

The preparation of Savage Pen Road, he says, is contingent on the weather over the upcoming days, which is forecast to produce more rains. In light of this, the NWA is reminding the public to remain vigilant when using roadways located in hilly terrain like Gordon Town and neighbouring settlements as well as to obey the prohibition order now in place in relation to Gordon Town road.