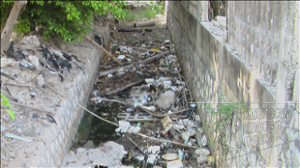 The National Works Agency has embarked on another round of itsDisaster Mitigation Programme. The new programme, which is valued at 200 million dollars, is being implemented in all parishes.
Manager of Communications and Customer Services at the NWA, Stephen Shaw says over 100 critical drains and gullies have been identified for attention.

The drains include those in perennial flood prone areas, such as Big Pond and Hartlands in St. Catherine, Marcus Garvey Drive in Kingston and Mitchell Town in Clarendon.

Mr. Shaw says the programme of work is still being finalized in some parishes, but the NWA expects the cleaning exercise to be executed over the next eight weeks.

He says consultations have taken place with elected representatives in each parish, so as to involve a wide cross section of persons in the discussions on which drains should be done.
Mr. Shaw says this approach is being used, as the budget cannot satisfy the demands placed on the agency by some communities.

Over the last 18 months, the NWA has spent more than one billion dollars in carrying out mitigation and flood control works in many communities across the island. Additionally, over 300 million dollars has been spent on constructing retaining walls, damaged in flood events.