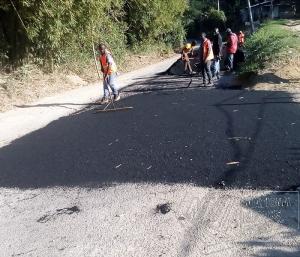 The National Works Agency (NWA) has commenced a major patching exercise focusing on roads across the country. The programme which is valued at over 420 million dollars is being implemented in all parishes.

Manager of Communication and Customer Services at the NWA, Stephen Shaw says that the works, which form part of the Hotmix Patching Programme, will seek to address many of the areas that have been impacted by recent heavy rains.

He says that the budget is finite and will, however, not address all the areas that would have been impacted, as the programme is about addressing the driving surface of corridors and not major rehabilitation, which some areas need.

Mr. Shaw says that just over 50% of the budgeted sum will be spent in the parishes of Kingston, St. Catherine, St. Andrew and St. Thomas. Nearly 100 corridors are to be targeted in these parishes.

Mr. Shaw says that the preparatory works are now underway in all parishes as the Agency intends to have the activities completed within six weeks.