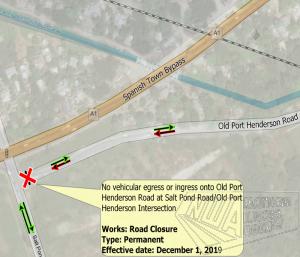 Effective, Monday, December 2, 2019, the section of the Old Port Henderson Road, which runs parallel to the Spanish Town Bypass in St. Catherine will be permanently closed. The road will be closed where it intersects Salt Pond Road.

Manager, Communication and Customer Services at the National Works Agency (NWA), Stephen Shaw says that the closure is to eliminate the right turning movements from Old Port Henderson Road, which regularly interrupts traffic flow, causing a pile up along the Spanish Town Bypass, where it intersects Salt Pond Road.

The upgraded intersection will allow for easier left turning manoeuvres as a slip road has been constructed for the benefit of those motorists.

Mr. Shaw explains that motorists travelling from the direction of March Pen Road wishing to access Port Henderson Road will also have to use the upgraded intersection. The traffic signals at the location have been improved and modifications done to the rehearsed timings in order to accommodate the increased levels of traffic.

The motoring public is advised to pay keen attention to the changes and take all the necessary steps to ensure safety along the new path.